I was naïve in 1996. I had moved to Los Angeles that summer after getting my degree in Film & Video Production. I wasn’t one of those people thinking I could be the next Spielberg. Hell, I thought I had a pretty reasonable plan. The recruiters for the college I had gone to assured me the lowest paying job in the movie business was $18.00 per hour. And you worked mad overtime! I could work on a few movies a year and put away enough to make my own movie. Seemed like a good plan.

By The end of 1996 I thought I was well on my way. You see I had been dropping off resume’s at every production office and film set I could find. One of those sets that I stopped by was Digital Domain’s Dante’s Peak sets being built at the old Air National Guard hangers at Van Nuys Airport (these hangers have since been torn down), and they called me back.

So what job did I get? Camera? Lighting? Model Maker? Well Locations Assistant actually. (in reality, security guard). But that didn’t matter. It was a foot in the door! Oh, and that $18.00 an hour thing? That was bullshit. I got hired at minimum wage! The overtime? That was glorious. 7 days a week, 12 – 20 hrs per day. I was taking home more per week then I used to per month.

And there was room for advancement. Yes there was. I was asked if I wanted to help either the camera or lighting department. I picked camera. In hindsight, that was a mistake. There were 5 different camera crews working on the VFX crew for Dante’s Peak, and I was sent to work with the crew being run by Cinematographer Les Bernstien. Les and I didn’t see eye to eye. In fact, I don’t think he liked me very much at all. (Of course, at the time, I was an arrogant know it all asshole 21-year-old kid from some small film school in Florida…) He may not have disliked me, he may have just been indifferent. But I was not accustomed to the west coast social norms yet so it came across as gruff, and rude to me.

So the show flipped (went union) during this time. I was un-scheduled from the camera crew (shy of the days needed to get my union card). I sometimes wonder if I had gone to help the lighting guys instead I might have ended up walking off that job with my IATSE 728 card…

Anyway, Dante’s Peak was one of the films that came out in the mid to late 90’s “Oh my god Y2k is coming” Disaster revival. (After “Twister” but before “Deep Impact“) We were rushing to get the film finished before rival “Volcano”, and therefore had crews working 24/7.  I would usually work overnight as locations assistant.  Let’s not act fancy about locations assistant. This meant I would open the gate to let people in or out, and patrol the lot hourly to make sure there were no spies from Volcano trying to sneak onto the set (yes, really). Occasionally I would be called by someone on the crew to hunt for ghosts.

During the day, I would wander to set to work with the camera crew, (and later to just observe and learn). What an amazing crew it was. This was a spectacle film. Done before everything was made in a computer.

Although CGI was beginning to creep in already. The photo above shows the miniature mountain that was to be used for the volcano (it is carved out of Styrofoam). This huge sculpture was never used in the film. Instead a CGI matte painting was used.

Dante's Peak had the largest water release in Hollywood history (up to that point). The structure built to accomplish that was massive! A miniature 4 stories tall! It was built to accommodate 2 scenes. The tank on top would release to one side to for the scene where the dam gives way. Or it would release to the other side to shoot the scene where the bridge gives out (along with many other rushing river shots). Both paths converged at the bottom in a very large receiving tank.

Below is a series of behind the scenes photographs I took of this massive set.

I met a lot of good people and I learned a lot of things in the 5 months that I worked on Dante's Peak. (And yes, that means I was working there after the movie came out in theaters. The last shot was completed a couple weeks before the movie premiered, and then we had to take all of that crap down. Years later I would drive down Balboa Blvd past the Van Nuys airport and still see part of the huge doors that released the water in a field behind a derelict building. I think they are gone now, but who knows. I don't know what happened to the people I met on Dante's Peak. Some of them have popped up from time to time. There was Scott Jolgen (whom I later tried to unsuccessfully to co-write a screenplay with) "T" who was trying to be an actor, Chris Duddy (The DP) who I later saw on Howard Stern, Les Bernstien (the DP that didn't like me) who I just looked up while writing this to see he his still doing quite well, Mark Fenlason (Who I never saw again, but heard his name around constantly over the years). Grant McCune (the great).

But it wasn't just the memories and knowledge that I still have from Dante's Peak. I also still have my crew Hoodie (The print on it is the sticky image in the top left of this page), my crew jacket and a Dead Fish Unit T-Shirt. I also have a few pieces of miniature buildings, and the head of actor Charles Hallahan. 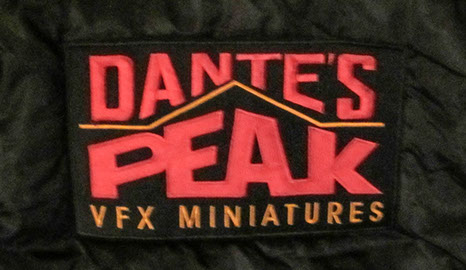 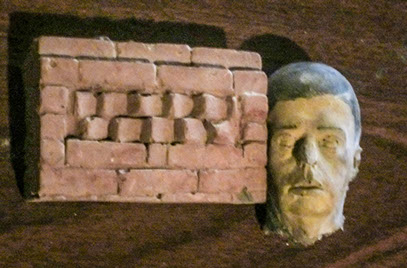