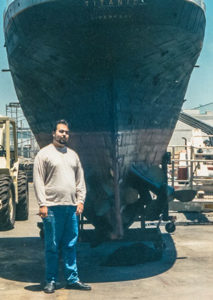 Titanic came at an interesting point in my life. I had heard about Titanic when we were shooting Dante’s Peak, However, I didn’t expect to work on it. When Dante’s Peak wrapped, about 5 different crew chiefs from that shoot had all told me they wanted me working on their next project. It was to be “Die Hard in space” I was told (it ended up being Armageddon). I was told it would start in a few weeks. So I did what any 21 year old would do. I went on vacation for 2 weeks. When I got back to Cali, I was told the shoot had been pushed for another 2 weeks… so I partied. Then it got pushed again. Then finally I was told that I wasn’t part of the “Approved list” of hires.

So I hit the pavement. I talked to some people at Digital Domain, and they sent me to talk to George Stevens (the Model Shop lead on Titanic). By this point Titanic was dangerously over-budget, and the trades were calling it “James Cameron’s Water World” Everyone thought it would tank. I didn't care. I needed the money, and was a huge fan of James Cameron. So I took the job. I applied for a model maker position, and when I was hired, I was hired as a P.A. (I was told it was because they were over budget and they couldn't afford to hire me at a model maker rate, but lets not kid ourselves, I was a P.A. / Runner who would do model making when there wasn't anything else for me to do.)

I was really only there for the last month or so of the shoot, and most of the work I did was for the scene of the boat ripping in half when it is sinking. We had the middle section of the ship in a water tank in a very large airplane hanger in Play Vista (This was actually part of the old Howard Hughes hangers).

I remember we had done a few takes and James Cameron had seen the dailies and wanted more debris falling out of the ship. The debris that was coming out was pushed by pneumatic rams, but we didn't have time or budget for more of those. I went to a “99 cents” and bought hundreds of dollars of wooden doll house furniture, brought it back to set, and repainted it (I also added small pieces of lead to each piece and tested the buoyancy to make sure they looked realistic floating in the water.)

5 guys (myself included) got into the ship. 3 in the back, and 2 in the front. We each had a pile of “debris” and instructions to start pushing it out any hole we could find when we heard someone yell “Action!”. I was standing in the middle (on a 2x4). I had my first 2 loads of debris ready to be pushed out. One on either side of the smokestack. “Everybody set?” I heard them call. We all chimed in “Set!”. “Roll Camera!” came the next call followed by the obligatory “Camera 1 speeding!” “Camera 2 speeding”... and down the row. Then Came that long, stretched out moment... you know the chaos is about to erupt, but it takes forever. Then comes the shout. “Action!”. Pneumatic rams go ff on all sides. I start pushing my debris out when the ship starts to move! I had forgot the whole structure I was in was on a gimbal, and falls into the water as the tearing progresses. I went about thigh deep into the tank. Trying like mad to get my debris pushed out, and not fall completely into the tank myself. At one point, I think my arm went through the smoke stack. I am not sure if it was visible to any of the camera angles... but we did have to redress for another take... actually, a few more takes. Each take took a few hours to re-set. That was oddly just enough time for my pants to dry before I had to get dunked in the water again.

Most of the photographs I have here are from that scene. This was 1997. I didn't have a camera phone (Hell, I still had a pager). My camera was a big 35mm SLR. I only brought it to set once. If I had known now... There are also a few shots of the iceberg and front and rear ends of the ship. 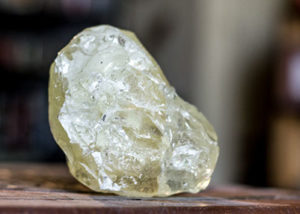 The Iceberg: I also was there for the shooting of the scene where the iceberg scrapes across the front of the ship. The iceberg was mostly fiberglass. However, It had a huge section made from breakaway glass that a pneumatic ram would shatter as it collides with the ship. After we shot the scene, I was instructed to sweep up the breakaway glass pieces and throw them out… I kept one rather large piece. So here is a pic of a piece of the iceberg that sank James Cameron’s Titanic:

An interesting thing about the Titanic miniature sets: We had a few TV's around (on those high school AV push carts with the tray underneath for the VCR). The guys from the main office at Digital Domain would bring by finished clips to show us from time to time. One day, I arrived on set a bit early, grabbed a coffee, and went into the main hanger. On one of these AV stands, someone was running a loop of the scene shot where they guy falls from the keel of the ship and hits the side on his way down. I sat there for a moment watching this play over and over. I had never seen anything like it. It was at that moment that I knew this was going to be an incredible film. Despite what the trades were saying about it.

The end of Titanic (for me) is interesting story in itself. We basically had to get out of the Hughes hanger. The lease was up, and the next tenant was moving in. The next tenant was Godzilla. They started moving in while we were still moving out. It was an eerie feeling showing up on set one day and seeing the Titanic with the New York Skyline behind it.

During the time we were moving everything from the Hughes Hanger in Play Vista to Digital Domains main buildings in Venice, I had the joy of driving a flatbed truck with the front section of the Titanic on it (the section seen in the photo with the iceberg). After delivering this (and while we still had this huge flatbed truck) I was asked to help the company out with another problem it was having. Not one to refuse OT, I said sure.

I was sent with the flatbed to a “public storage” type place that had been taken over by Hollywood. Apparently Digital Domain had rented a huge section for storage, and most of the miniatures from the film “Chain Reaction” were there. The rest of the building was being rented by a TV show called “Buffy The Vampire Slayer”. They wanted to use the space Digital Domain had to build sets for their show. So a couple of us loaded up the truck with all the “Chain Reaction” Miniatures. Once the truck was loaded, everyone else went home. I was told there would be people at the main building to help me unload. There wasn't. Being the asshole that I was, I parked the truck in the loading dock closest to the rest of the parking (so it blocked the rest of the parking). When I was about half way finished unloading the truck by myself, and exec came out and wanted me to move the truck so he could leave. I told him he'd have to wait till I was done. I never worked for Digital Domain again.

We had a wrap party for Titanic on the Queen Mary in Long Beach. I arrived to find that I wasn't on the guest list. Luckily for me, one of the bosses was behind me in line and vouched for me. I met Linda Hamilton On the deck, and talked with her for a few minutes. We talked about Dante's Peak (which we had both worked on, but never in the same place at the same time). Interestingly enough, I never saw Leonardo DiCaprio while working on Titanic, but I did end up seeing him at the Oscars one year, and when I worked on the Cinemax Final Cut Inception episode.

An Interesting note: When we wrapped Titanic, The crew chief (George Stevens) told me I should go talk to a guy in Glendale named Gene Young. I ended up working for Gene for quite a while, and we became good friends.

I also ran into Bill Paxton briefly one day in a hallway at the hanger. We exchanged Hellos and that was about it. A year or so later, I was working on "Mighty Joe Young", and ran into Bill Paxton again. I was surprised that he had remembered me. (If you haven't seen his film "Frailty", do it. it is Brilliant.)