Someone's Knocking At The Door​

The Cinematographer on Someone’s Knocking at the Door was a guy named Niklas Larsson, and, as a Gaffer, he is really great to work with. Niklas and I talked about the project before hand, and we discussed the look he was going for. When it came time to shoot, he would tell me his camera angles, and let me go. Of course, once we were set up and did a camera rehearsal he would let me know of any changes he wanted to the lighting.

We shot Someone’s Knocking at the Door on a Red 4k cinema camera. This was back in 2008 when the Red was fairly new. The sensor back then wasn’t as good as they later became, and I had very little latitude to work with in the lighting. This actually helped in the end because that was the look we were going for, but it did take a bit of getting used to…

Before principle photography started we had to shoot some 16mm footage that was to be projected in a scene in the movie. Niklas was out of town at the time, so I shot it. We used a CP-16 and a Krasnorsk-3 to shoot the 16mm footage. We were in the Abandoned li. The scene had Vernon Wells running test on Noah Segan.

There was also a sequence in the film where the lead characters are looking through old patient files. Chad asked me to shoot the stills for those (as well as Behind the scenes stills). Below is a full set of those “patient File” photos. I shot these photos in B&W on 6×4.5 Film using a Bronica ETR Camera. Now keep in mind these photos were supposed to represent admittance photos for a mental hospital.

Production lasted about 11 days with most of the film being shot at Linda Vista.  We spent a day in Angeles Crest shooting the funeral and the “Reverse Birth” sequence, and a couple days on the stages at Hollywood Camera.

Linda Vista Hospital is reportedly haunted. I am not a big believer in ghosts, but I'm open minded. One day, we were shooting downstairs near the morgue. Everything was set for the setup they were on, and the coverage. I decided to go upstairs and pre-light the next location. I was told Lourdes was already up there setting up. It was the scene where Meg is attacked by Det. Fuller. The room was at the end of a hall, and it shared a bathroom with the next room down. The wise ass that I am, I decided to try and scare Lourdes. I went through the first room into the joining bathroom and started scratching the door. I heard what I thought was Lourdes scream. I opened the door, but no one was in the room. I checked the hallway. No one. I went about setting lights, and a few minutes later Lourdes came walking down the hallway. She said she downstairs in the equipment room. No one had been on that floor except me.

There was a Midnight screening of Someone's Knocking at the Door at the world famous New Beverly Cinema(owned by Quentin Tarantino). Chad asked me to adjust the poster to promote the event (and I believe do a different trailer for it or something). Anyway, I have one of the fliers from the event promotion, and I thought I'd add it here. 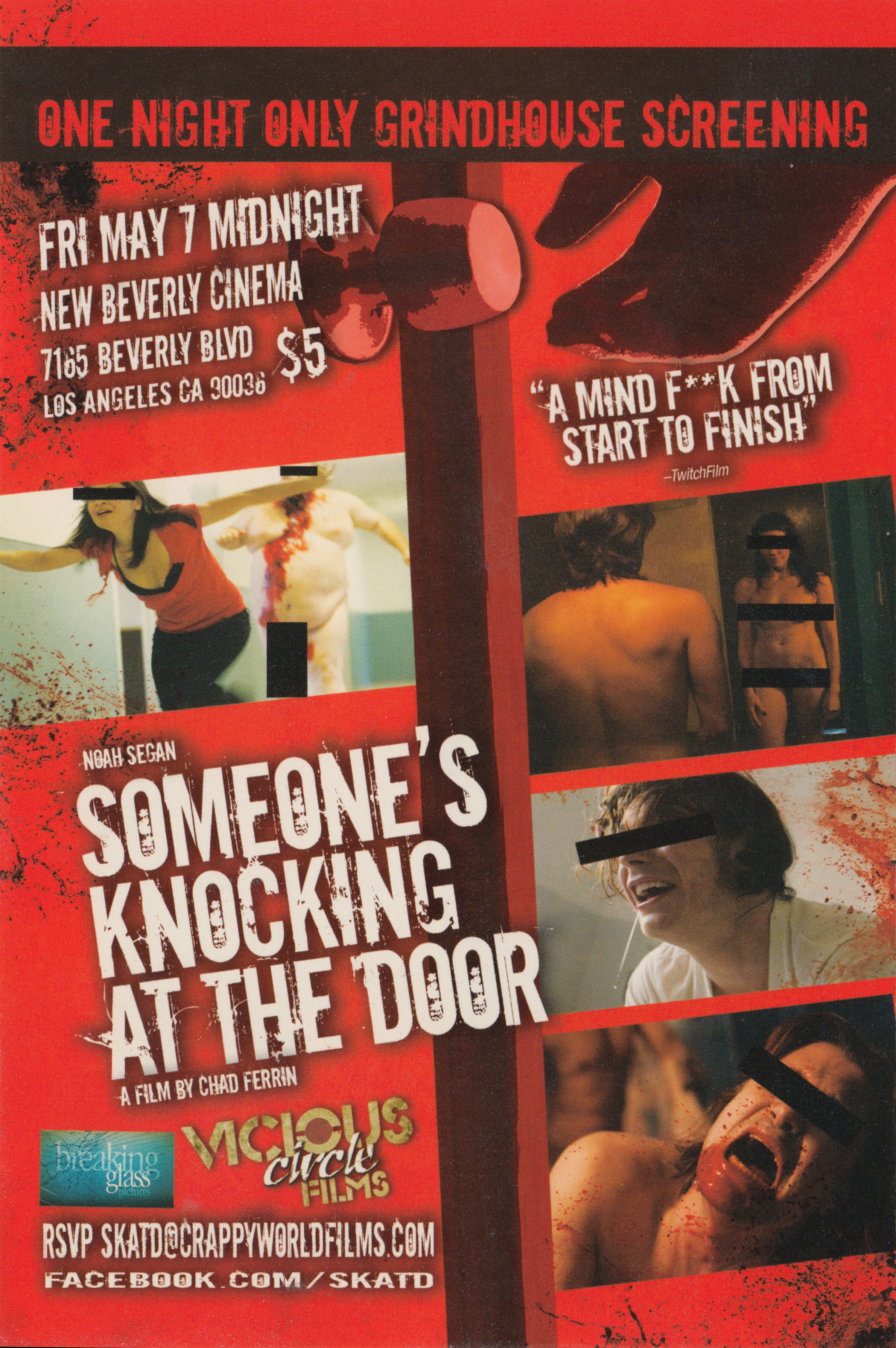